Since Aseprite v1.3 you can create tilemaps with tilesets.

What is a tilemap? A tilemap is a special kind of layer where each grid cell on the canvas is a reference to a tile (a little image) in its tileset. You can create a new tilemap from Layer > New > New Tilemap Layer or pressing Space+N.

What is a tileset? As its name says, it's a set of tiles, just like the color palette which is a set of colors. Each tile has an index and can be re-used in different position in the canvas on each tilemap grid cell. 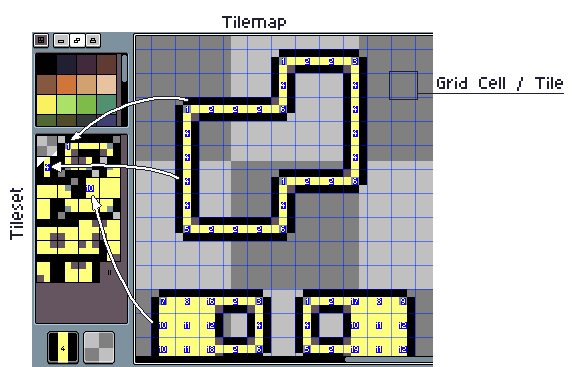 We can compare a tilemap with an indexed image:

When you are in a Tilemap Layer, there are 2 main modes, you can switch between these modes pressing Space+Tab:

When we draw pixels in a tilemap, we are modifying the content of each tile, but there are three special modes that indicate how we should handle these modifications between tiles: